The G1 Mares’ Hurdle will now be supported by Close Brothers, the leading UK merchant banking group. Close Brothers’ involvement with The Festival began in 2016, when it took on the sponsorship of the novices’ handicap chase on day one. Close Brothers’ are also a Group wide partner of The Jockey Club and Sir A P McCoy is the company’s brand ambassador.

The £120,000 G1 Close Brothers Mares’ Hurdle (4.10pm) was introduced to The Festival in 2008 and has been dominated by trainer Willie Mullins, who has landed nine of the 12 runnings to date. Six of Mullins’ victories were provided by the extraordinary Quevega, who created history by winning the contest every year between 2009 and 2014.

With Close Brothers transferring its support to the Mares’ Hurdle, the novices handicap chase will now be sponsored by land and property company Northern Trust Co Ltd.

Introduced to the race programme when The Festival extended to four days in 2005, the £70,000 Northern Trust Company Novices’ Handicap Chase takes place over two and a half miles and is the penultimate contest on day one (4.50pm). Always a very competitive contest that often attracts a maximum field (20 runners), the Northern Trust Company Novices’ Handicap Chase went to subsequent G1 winner A Plus Tard in 2019 for owner Cheveley Park Stud, trainer Henry de Bromhead and jockey Rachael Blackmore. 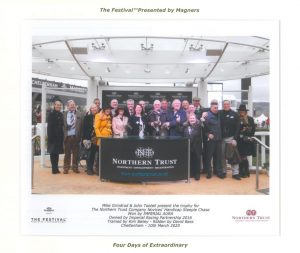 Carey Weeks, regional head of partnerships for Jockey Club Racecourses South West, said: “Cheltenham is extremely grateful for the ongoing support from Close Brothers, which is now in its fifth year of partnership at The Festival.

“It seems very appropriate that the name of such a dedicated Group Partner is now associated with one of the G1 highlights at the Home of Jump Racing.

“I would also like to take this opportunity to welcome Northern Trust as the new sponsor of the novices’ handicap chase on day one of The Festival.

“Northern Trust will have its name attached to what is always one of the most hotly contested contests of the four days and one that gets a lot of people talking in the countdown to The Festival.”

Northern Trust Company Ltd is pleased to confirm that Miller Homes has completed the acquisition of 31 acres at their West Chirton (South) Industrial Estate in North Shields.

The site which forms part of the West Chirton (South) Industrial Estate sits on the southern part, and was characterised by large areas of vacant land. Northern Trust has retained the northern part for commercial use.

North Tyneside Council granted outline planning permission to Northern Trust back in 2017 to build up to 400 new homes, and subsequently appointed Knight Frank to facilitate the sale of the site. Miller Homes was selected as the preferred developer and a reserved matters application was approved last year for the building of 399 new homes in a mix of two, three and four bedroom houses, along with a proportion of affordable.

Stephen Glenn, Land Executive at Northern Trust commented: “We have worked closely with Miller Homes, Knight Frank and other key stakeholders in realising the future of this brownfield site which will bring further investment into the area for the benefit of the local community. The plans have already enabled us to reinvest into the commercial section of the site through refurbishment works to the existing units.”

Philip James, Associate Land Director at Miller Homes, said:  “We are delighted to have completed the acquisition of this parcel of land at West Chirton Industrial Estate.  Miller Homes has a strong track record in the North East and we look forward to bringing a range of much needed high quality new homes to the area.  Work is due to start on site imminently with a sales launch anticipated in the summer.”

James Platts, Partner at Knight Frank Newcastle, added: “Miller Homes have acquired a number of sites across the North East, from Knight Frank. I’m confident West Chirton will prove to be a very successful residential development. We were happy to act on behalf of Northern Trust.”

Northern Trust Company Ltd is pleased to confirm that they have recently completed the sale of 1.14 acres of land at Kirkham Road, Treales to Prospect Development (NW) Ltd.

Northern Trust secured outline planning permission for 3 substantial building plots on the site in 2019 and Prospect will now prepare details plans for the proposed development.

This is the second site sold by Northern Trust in Treales, and also had planning for 3 plots.

Northern Trust are seeking further sites across the region and are ideally looking for strategic brownfield or greenfield sites from 3 acres up to 100 acres plus, for purchase or via a promotional agreement.

Northern Trust Company Ltd is pleased to welcome David Jones to their Land and Development team.

David has joined the company as Senior Land Manager and will be working on a variety of projects. Northern Trust has a land bank of over 5,000 acres, and is actively looking for further residential and commercial land opportunities to purchase, promote or develop throughout the UK. 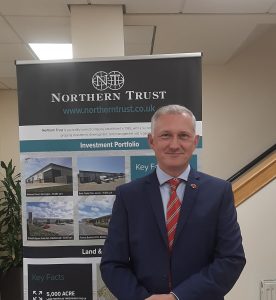 The company has an impressive track record of achieving planning consent on sites and has been successful promoting its own, and third party landowner’s sites. In the last 24 months the team has achieved planning for c 4,500 residential units, and our current projects covering more than 30 sites incorporate a mixture of uses including the potential of bringing forward a further 5,000 new homes.

David brings with him a wealth of experience having previously worked with National house builders, land promoters and in consultancy for over 25 years. He has worked on a range of development projects throughout the UK.

David commented on his move to Northern Trust “I am delighted to be working with Northern Trust and look forward to securing and delivering a strong pipeline of development opportunities.”

Northern Trust is pleased to confirm that it has completed the sale of a 3.94 acre land site off Garstang Road in Pilling, near Poulton-le-Fylde to Create Homes.

Northern Trust successfully gained outline planning consent on the site for up to 40 new homes, and following completion of the reserved matters application the sale has now been finalised.

Stephen Glenn, Land Executive at Northern Trust commented “We have worked closely with Create Homes and Wyre Borough Council on bringing this site forward for future development, and we are now looking forward to seeing this exciting new scheme come to life.” 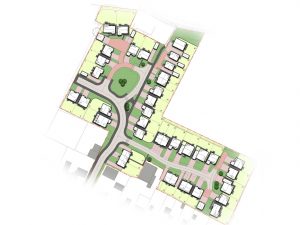 The project follows on from the successful completion of Create Homes’ first two sites – Ash Meadows and St Petersfield’s, Inskip – near Preston. Just a short drive from the coast, the development is planned to include a mix of the company’s popular & spacious house types such as The Rossall and The Stalmine, as well as The Brock – a new 4 bedroom house type, which extends their portfolio.

Northern Trust is pleased to announce that it has acquired three multi-let industrial estates in Yorkshire at Rossington near Doncaster, Thurnscoe near Barnsley and Hornsea. The three estates provide a combined floor area over 29,000 sq ft in 26 units with each of the estates situated in close proximity to existing Northern Trust assets. 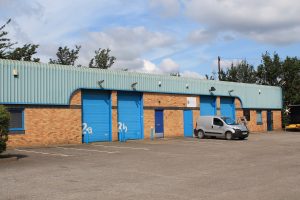 The three estates will be actively managed by Northern Trust’s in-house surveying team Whittle Jones Asset Management. The Yorkshire portfolio comprises of 34 assets totalling over 850,000 sq ft of predominantly industrial space in more than 440 units. The assets are located throughout the whole of Yorkshire, as well as Gainsborough in Lincolnshire.

The outline planning permission means that the currently derelict site will be transformed to include:

Northern Trust has worked closely with the local planning authority, local councillors, local community and other key stakeholders to bring forward the regeneration plans of this disused brownfield site.

A spokesperson on behalf of Northern Trust commented “We are pleased to confirm that SJ Roberts Homes Ltd has been identified as the preferred development partner. They are a proven local house builder and their previous schemes have focused on quality and communities. We continue to work alongside them in bringing this high quality scheme to fruition.”

Northern Trust Company Ltd has announced that it has successfully gained outline planning permission for up to 84 new homes in Calverton, Nottingham.

The planning consent which is subject to completion of a legal agreement was granted by Gedling Council. The plans cover 6 acres of the 24 acre site on land off Flatts Lane.

The development includes provision for affordable housing and will also provide contributions towards education in the area, health facilities and bus stop improvements.

A spokesperson for Northern Trust commented “We are delighted to have secured outline planning permission for this site, having worked closely with Gedling Council and other key stakeholders to bring forward these plans.”

Northern Trust will now look to commence a disposal strategy, inviting proposals from prospective house builders. Savills have been appointed to sell the site. For more details please contact Ann Taylor at their Nottingham office.

Northern Trust is pleased to announce that it has acquired a multi-let industrial estate at Forge Way in Darlington.

The estate covers 16,580 sq ft and comprises 8 units arranged in a single terraced block. Individual unit sizes range from 1,500 sq ft up to 3,800 sq ft. The estate is situated within Cleveland Trading Estate, less than a mile north of Darlington town centre and close to the A167 main arterial road.

Tom Parkinson, Director at Northern Trust commented “We have been expanding our multi-let industrial portfolio, and in the last 12 months we have added over 300,000 sq ft through new acquisition and development. Forge Way offers good quality industrial space in a strategic location, complementing our existing portfolio across County Durham, and is part of our on-going strategy to acquire / develop multi-let industrial assets to support the SME business community in the area.”

Work is now underway to convert the estate into a Trade Park. The vacant units 21 & 22 will benefit from a new glazed trade counter frontage with roller shutter, new personnel doors, external redecoration and internal refurbishment incorporating LED low bay lights to the warehouse.