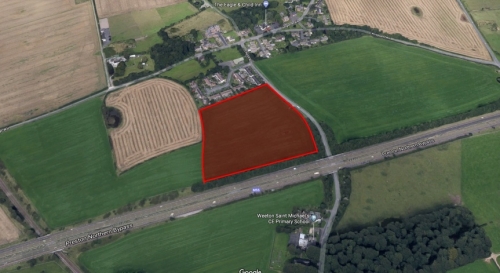 Outline planning consent granted for residential development of 25 dwellings together with the provision of a public car park and public open space / recreation area.

The site is located off Church Road in the village of Weeton near Preston. The village has the benefit of good access to the country's road and motorway network as well as a village school, pub and a village hall.

The site has outline planning consent for 25 new homes, but it estimated that there is possiblly space for a higher density scheme of up to 40 units. The large area of public open space recreational area is proposed to be gifted to the Parish Council. The plans also include a 40 car space car park for use by the village and its public facilities.

The site has planning consent for 39 new homes. The site has now been sold to Concert Living.

The average speed for the postcode PR43WD is 7.4 Mbit/s

The estimated maximum speed for the postcode PR43WD is 8.1 Mbit/s